I am using an Arduino Uno and a Mac and trying to upload my code into the board. I tried uploading the program from different computers(MacBook Air and Pro) and I still have this problem.

How do I fix this? I tried downloading the FTDI driver. I went to the website that they suggested and tried following the instructions. I even followed other posts in Stack Exchange but I still cannot upload the code.

I am using a cable to connect to my Mac and I am using the Arduino software. The cable connected between the Arduino USB and Mac USB port.

I tried quitting and relaunching Arduino app. Once it launches I just press the upload button while my USB is plugged in. My available ports in the app are /dev/cu.Bluetooth-Incoming-Port and /dev/cu.Bluetooth-Modem

And this is the error

Plug your Uno into the Mac using a known good USB cable.

Under the USB selection (on the left) please confirm whether or not you see something like this: 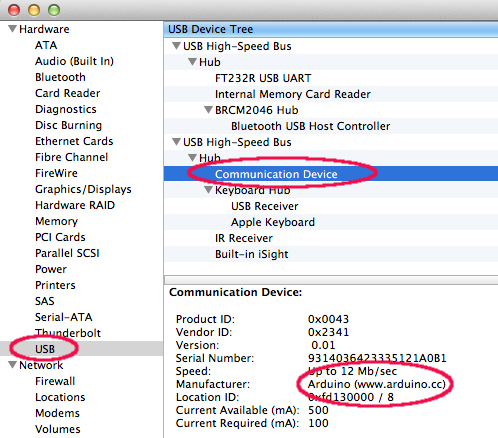 You can also open a Terminal window and type:

Amongst other things you should see:

In your Arduino IDE you should see the Arduino as a tty.usbmodemfd131 (or some similar number). 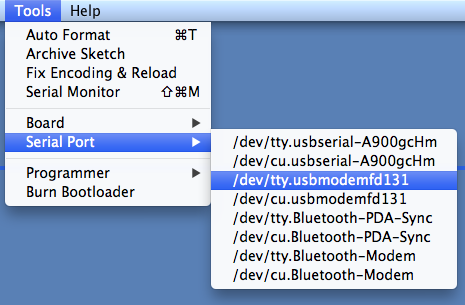 If you see all that it should work.

If not, please state in what way it differs.

You should not be selecting any programmer. You should be doing an "Upload" (Command-U) not an "Upload using programmer" (Shift+Command+U).

I solved this problem. Maybe this post will help others.

I've come across this problem a couple of times. I literally searched for hours for the answer and ended up using several suggestions.

Both scenarios I solved are documented below as 'Scenario A' and 'Scenario B':

Plugged in a new Arduino Uno R3 board, successfully compiled the standard "Blink" sketch. When I tried to upload it to the board, I got this message:

The Port Options in the IDE (Tools--> Port) only showed /dev/cu.incoming-bluetooth-port

The process that enforces this rule is called csrutil.

You'll have to disable this process to remove the FTDI driver. Then you'll need to re-enable it when you are done. This required a restart in recovery mode. Here's how to do that:

When you restart the arduino IDE, you should see a more comprehensive list of ports besides just the bluetooth port.

This board was an import and clearly not an original Arduino/Genuino. Attempts to load sketches resulted in this lovely error:

There was only one Port listed in the IDE, dev/cu.Bluetooth-Incoming-Port.

It had been a while since Scenario A had occurred and since then I'd installed a few OS updates. Checked the drivers and low and behold, the darned FTDI drivers had RETURNED!!

I repeated the steps in scenario A above but the problem remained.

Then I installed an updated board configuration from arduino and it worked! Testing on the first board I'd used under scenario A were successful as well. Here's what I did:

I've also had this error message when I've left another serial terminal connected to the same port the Arduino IDE is trying to use.

I got this error on my Macintosh system and the problem was that I needed to choose the correct port on the USB. Somehow it had auto-connected to a Bluetooth port which was listed under Tools->Port as /dev/cu.Bluetooth-modem and was my daughter's cell phone. I chose a port labeled /dev/cu/wchusbserialfd... and it worked fine.

I had this problem on a Linux distribution. It was just a permissions issue for me.

from the Linux Terminal in the Arduino folder worked fine.