Have I bricked my Arduino Uno? Problems with uploading to board

I can't upload sketches to my Arduino Uno.

I've got quite a few Arduinos, and over the last few years have only ever "bricked" one, and I think that was by zapping it with static electricity. Unfortunately that particular one had a SMD (surface mounted) processor chip, so it isn't easy to try swapping it with another chip.

An "Arduino Uno" is not just one thing that might fail. It has multiple major components, and possibly only one has failed (if any). See this reference photograph: 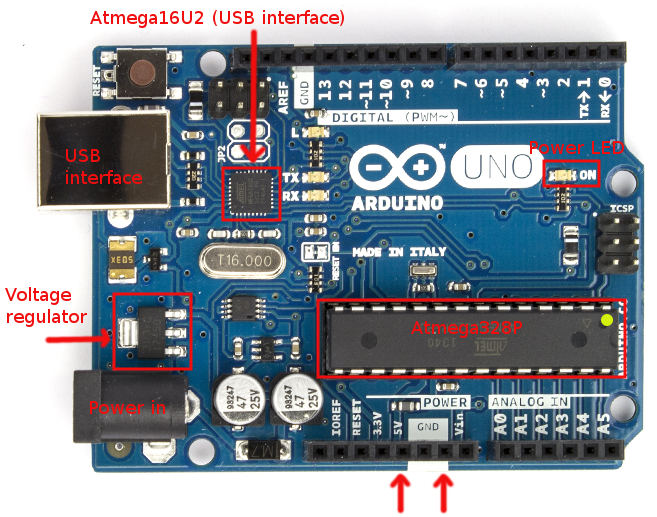 Also note that since the "L" LED is connected via an op-amp, it may illuminate if pin 13 is set to an input in your sketch. This is normal. It doesn't mean that something is erroneously sending data.

(You can buy a cheap multimeter for around $10 if you don't have one, but you are better off getting a better one for around $50 - check all the electronics web sites and stores.)

If you do not get 5 V with the USB cable plugged in make sure the other end is connected to your computer. Also try a different cable.

If you have the Optiboot bootloader (the Uno normally ships with that) then if you press and release the Reset button, or unplug and plug the USB or power cable back in, the "L" LED should flash quickly 3 times. The "on" and "off" times are 50 ms each, the three flashes should be over within about 1/3 of a second.

If it doesn't, you may have a problem with the bootloader, or the main processor chip (Atmega328P).

Important: If you are having trouble uploading sketches remove any connected devices (like shields). Also remove jumper wires plugged into the board sockets. In particular, there should be nothing plugged into digital pins 0 and 1 (Rx and Tx) because that will interfere with communicating with the uploading computer.

Choose one of the simple example sketches (eg. Blink) and try to upload it. This is what you should see:

You may see the above, even if the uploading process fails. This could be because the wrong board type is selected.

If only the "Rx" LED flashes, it could be because of a problem with the bootloader, or the main processor chip (Atmega328P). Someone is knocking, but no-one is at home!

Check the board type

If the LEDs flash, but you get a message like this:

Check the board type:

If you have the wrong board type selected it will probably send the wrong uploading instructions, and time-out or otherwise fail. If you are like me and have different boards lying around it is easy to forget that the last upload you did was for a different board type.

If the LEDs don't flash at all, you may have the wrong comm port selected.

Try your Arduino on a different PC/Mac if you have one to hand. This can narrow down whether or not you have an issue with the particular computer you have plugged it into, or computers in general.

Do a loopback test 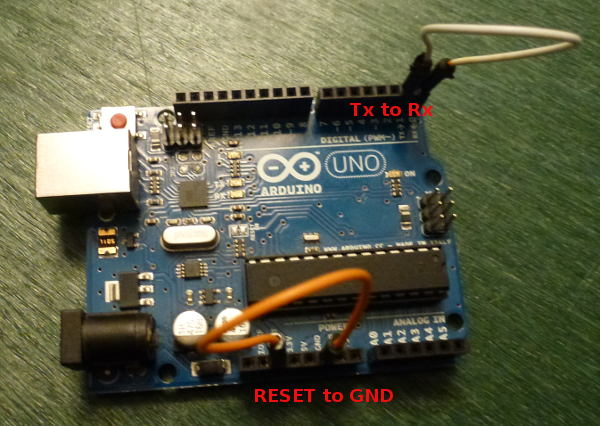 If everything is echoed back: That confirms you have the right comm port, the USB cable is OK and the USB interface chip (Atmega16U2) is probably OK.

If nothing is echoed back, check:

If your board fails the loop-back test, and you are certain the USB cable is OK, then you can test the Atmega16U2 chip itself. There is an ICSP (In Circuit Serial Programming) header on the board, adjacent to the Atmega16U2 chip, and near the USB socket.

Disconnect the power first (unplug the USB cable and any power cable).

Then you can connect the ICSP header via 6 jumper wires to a known good Uno, as shown in the photo: 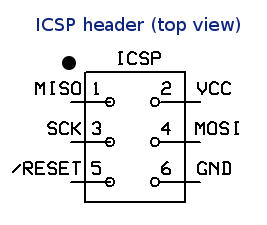 Once installed, open the serial monitor, set it to 115200 baud, and you should see something like this:

That would appear to indicate that your ATmega16U2 is not working.

Disconnect the power from the "known good" Arduino Uno and rewire the ICSP jumpers as per this photo, to connect them to the "main" processor on your Uno: 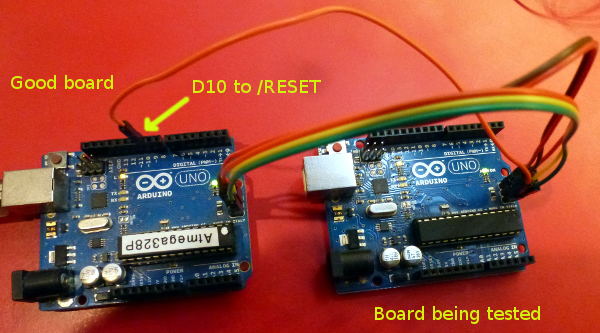 Pin 1 on the ICSP header near the ATmega328P chip is marked with a small white dot, below the "N" in "ON".

The wiring is the same as before, except you are connecting to the other ICSP header - the one at the end of the board, furthest from the USB socket.

Once connected, open the serial monitor, set it to 115200 baud, and you should see something like this:

In this case it confirms that the main processor is working, and has the Optiboot bootloader on it.

Things you can fix

This isn't easy to replace, but it is only needed if you use the power jack. If you run from USB then it is not required. Alternatively you could arrange for a 4 to 5 V supply (eg. 3 x AA batteries) and connect them to the 5 V socket on the board directly.

This is only required for uploading sketches via the USB port, and serial debugging. It isn't particularly easy to replace because it is a SMD (surface mounted device). However you can manage without it.

You can upload sketches via the ICSP header, if you purchase a ICSP programming device.

Examples of such devices plugged into the ICSP socket: 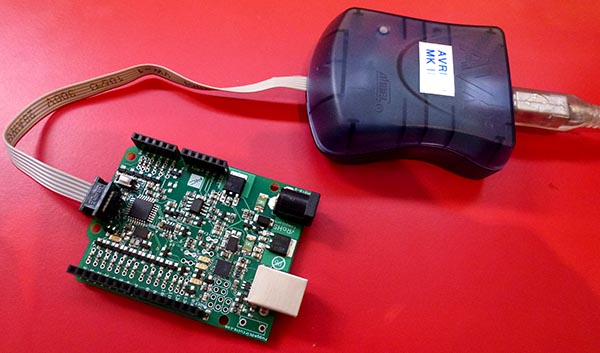 (Those photos were taken of a Ruggeduino, but the concept is the same).

You can also get an FTDI cable, like this: 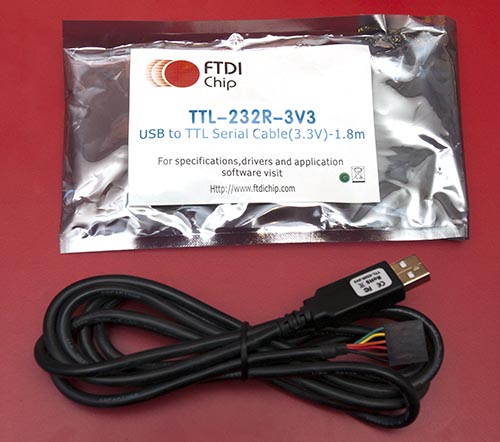 Connect it to your board's serial ports like this:

Now you can upload sketches directly to the main processor, bypassing the USB chip.

You can also use my Atmega chip stand-alone programmer to upload .hex files - this lets you copy the .hex file for a sketch onto an SD card, and then program the board via the ICSP header.

The main processor can be replaced fairly easily if it is mounted in a socket. Get a replacement chip from somewhere like Adafruit for around $US 6. Alternatively, try eBay. Try to get a chip which has the Optiboot bootloader already on it, to save hassle.

Carefully prise the existing chip out of the socket, and install the new one, taking note of the location of pin 1. Pin 1 has a notch on the chip, and its correct orientation is noted on the first photo in this post with a yellow dot (closest to the edge of the board). You will probably need to straighten the legs slightly. Hold the chip by the ends and gently push down onto a flat surface, like a desk, until the are pushed inwards a bit. Try to not touch the metal pins, you may zap them with static electricity.

ATmega328P responds but has no bootloader

I have a sketch at Atmega bootloader programmer which will replace the Optiboot bootloader. The wiring is the same as for the chip detector sketch. The code is at GitHub - nickgammon/arduino_sketches. If you click the Download button on that page you will get a number of useful sketches. The one you want is called "Atmega_Board_Programmer".

Install the sketch on your "known good" Uno, and connect it to the target board with the wiring shown earlier.

Open the Serial Monitor on your "good" Uno and you should see this:

Type "U" for the Uno (Optiboot) loader.

Type "G" to program the chip.

This takes about one second. Now the bootloader is installed.

The watchdog timer (off by default) can be configured to reset the processor after a certain time. The intention is to recover from a "hang" for a processor deployed in the field. However if the timer is set for a short period (like 16 ms) then the processor can reset again before the bootloader has a chance to do anything.

The symptoms are that you cannot upload any new sketches. Some modern bootloaders (like Optiboot) take steps to stop this problem as one of the first things they do. However others do not.

There is a way of recovering. Take these steps:

Problems with the Mega2560 upload

I mention this here, even though this post is really targetting the Uno board, because it is quite common.

Some versions of the Mega2560 bootloader look for "!!!" in the incoming upload from the PC, and if they see that, drop into debugging mode. This causes the upload to fail.

Boards with the ATmega32u4 as their main (and only) processor can be trickier to upload to. This is because the same chip has to handle uploads and also run your code.

There is a small window of opportunity, after the board is reset, when it looks for a new sketch to be uploaded. The technique for uploading to these boards is:

You only have a second or so to do this, before the old sketch starts running. Don't be discouraged if you have to repeat this process a couple of times. That is normal.

At least - as I assume you upload your sketch via avrdude - please give more information about the upload failure (e.g. output of sketch uploader) so people here can help you better.

An example for stopping the upload:

I have bricked 2x ATMega328P on my Arduino Uno board due to static (I think).

The static seems to have killed the TX pin and hence the program can't be downloaded using the USB cable.

The easiest solution is to replace the microcontroller. You can buy a new ATMega328P DIP programmed with the Arduino bootloader (such as this one from Adafruit) and you are ready to go again.

Alternatively, you can still program the ATMega328P's by using the Atmel Ice or AVRISPmkII programmer or by using another Arduino as an ICSP programmer. When you do, all but the Tx pin work fine.

3
avrdude : stk500_get sync<> attempt 10 of 10 not in sync : resp=0x20 how do i get pass this error for ardunio uno board
2
Is my Arduino Uno broken?
0
Arduino not working / not uploading
16
Burning Arduinos one after another
19
How to check my Arduino board is working or dead?
6
avrdude: stk500_getsync(): not in sync: resp=0x00
14
What happens when code is uploaded using the bootloader?
4
Is my Arduino possibly broken?
3
Can't sync with programmer Arduino Uno
2
Suddently, "avrdude: Device signature = 0x000000" with ArduinoISP. Is my chip dead?
See more linked questions

2
Why my Arduino Uno R3 doesn't work with a recompiled optiboot with BAUD_RATE=57600
0
How do I replace a burnt atmega328 with a new atmega328(bootloaded) in arduino?
0
How to upload program to board using Arduino sketch ver 1.6?
0
Problem Uploading to arduino uno board
0
Problem Atmel Studio 7 with uploading
0
Using Arduino UNO for uploading a sketch to the Espresso Lite v2
1
Uploading to an external Atmega328P with a clone UNO R3 with soldered chip