I have situation where I need to read RFID cards. There is already installed Roger security system, Roger gate control board and two rfid readers in parallel. By default board and RFID readers communicate in RACS(some sort of coded protocol) but at the moment system is configured to communicate in Wiegand26. Earlier I used chinese wiegand26 reader with Arduino with no problem.

With Arduino I need to read card read by RFID readers. Then I process data and make HTTP POST request. Arduino is supplied from Roger board ~13.5V DC I do not get anything in arduino, even if I connect RFID readers directly to arduino.

This question is not related only to Arduino.

I want to ask is it possible to do? To read data maybe I need some additional electronics?

What i also noticed that when Arduino is connected in parallel the Roger board not always reads the card from RFID readers. 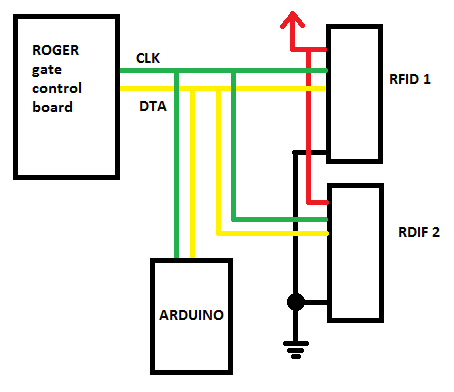 This is copy of Electronics.stackexchange

As long as the Arduino has both connections set to INPUT (not INPUT_PULLUP and certainly NOT OUTPUT) it shouldn't interfere at all.

You should also check that the idle voltage on the lines is indeed 5V as it should be. Anything more than that could cause the Arduino to chip the voltage to 5V through its internal ESD protection diodes.

Also you must ensure that the Arduino has its ground pin connected to the ground connection of the Wiegand system (which it should be since you are powering it from that).

If you would like to use more than 1 Wiegand reader, technically it should be possible to use AVR pin change interrupt. In this case you can use ANY 2 pins, even analog pins.

UPD: There is informationon Wiegand timing, might be useful: http://proxclone.com/wiegand.html

3
How to read an RFID reader?