I'm using Hc-Sr 04 ultrasonic sensor for my project and I want to know that if I could or not utilize an slope. Have you an idea?

I have a couple of these running right now, and they will often work at a slope when the surface is complex (not flat). However, the detection angle, as it comes from the sensors, appears to be about 30deg from centre in each direction. Hence, the sensors do need to be relatively pointed at the object being detected.

When placing my hand directly above it, it doesn't really matter what angle I tilt my hand, presumably since I have fingers that are not flat. On the other hand, if I put a paper towel in front of it, it will stop seeing it if I angle the paper towel more than 20 or so degrees.

Overall, if you keep the object within 30 degrees from the sensor's fixation point, it will work, granted the object, if flat, is "pointed" at (facing) the sensor flat-wise within about 20 to 25 degrees. For irregularly surfaced objects, it does not seem to matter too much unless the angle is pretty steep, such as 60 degrees.

Here is what I mean: 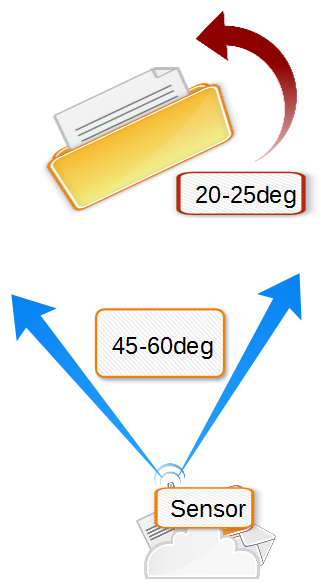 Slope surfaces may cause reflections so you need to try. I think 30 degree going to make reflection and gives wrong value