Change Options for the AVR Programmer via Arduino IDE

I want to program an ATtiny through the Arduino IDE. I have a somehow strange programmer. But I can upload via avrdude by

It took a while to figure out that I had to slow the baud rate via the -B20 switch. If I try to upload via the arduino 1.0.5 IDE avrdude is executed as follows.

My question is, how can I change the preferences such that I have control over the avrdude parameters? Say I want to add a -B20 switch and change stk500v1 to stk500v2.

First of all, be aware that -B20 does not specify the baud rate but the bitclock period (in us); this is specific to stk500v2 programmer.

Normally, enabling your programmer should only be a matter of adding it to the list of programmers known by Arduino IDE; that list can be found in hardware/arduino/programmers.txt. You would then append the following lines at the end of this file:

However, the problem here is that Arduino IDE does not seem to be able to use flag -B (bitclock period) but only flag -b (baud rate) which value is set to whatever you will put to strangeprogrammer.speed.

At least that's what I could find out by inspecting Arduino IDE source code: AvrdudeUploader.java never adds that flag to the avrdude command-line :-(

That means your options are: 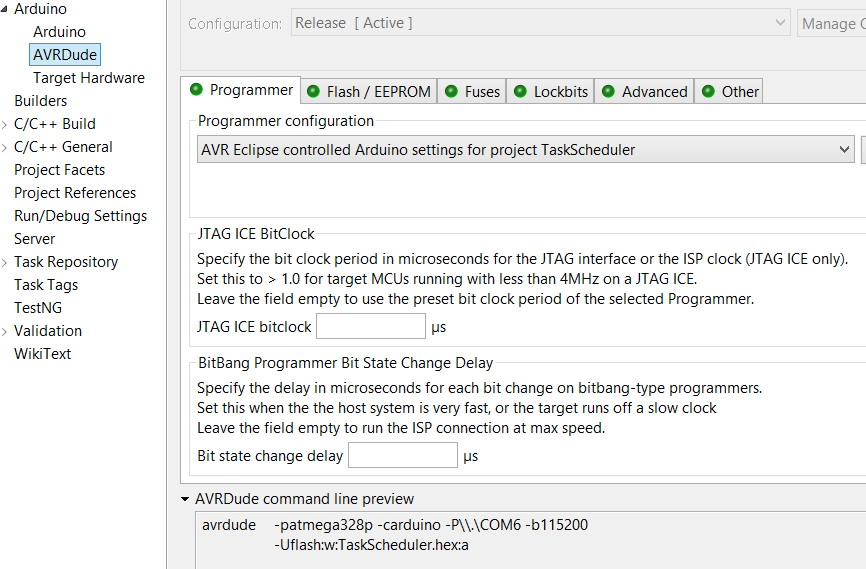 Not the answer you're looking for? Browse other questions tagged avrdude avr programmer or ask your own question.

0
Is it possible to use Arduino UNO programmer for other AVR microcontrollers?
0
Atmel Studio and Arduino IDE compiles the same code different
1
use arduino IDE for USB isp programmer
2
What does the 'arduino' avrdude programmer do?
2
Uploading .hex to ATTiny13 using Arduino
0
Programming ATMega328p using VP812 programmer (for AVR/Atmel chips)
3
How does avrdude burn a bootloader much quicker than the Arduino IDE?
0
Avr dude programmer