I've got an electret microphone and I understand that I need quite some amplification to get it to be read by an Arduino (0-5V input). So I seeked the web, but answers are as different as people on the street. Some use Op-Amps, some only a transistor cicruit or the like. This guy is using 2 amps before and after his filters Video, LM386 and this guy claims, that exactly this amp isn't good for the job: recommends NOT using LM386.

I really only want to have a threshold switch, so I need no filters whatsoever and not a super duper amplification. What is the simplest solution, with which I can read a voltage with the arduino? With a transistor alone (seems easiest to me so far) - how can I know how much it amplifies (or as I understand it modifies the "other voltage" to look the same)?

I found many different schematics using various op-amps, but regarding them I don't really need another tutorial, but rather a rule of thumb for a "readable" amplification. Is 100 times enough? I found circuits with 1000 times amplification, so I'm really wondering which one works fine.

However the really simple thing would be this: video at 17sec. At second 17 and 50 or so, they show an extremly basic circuit, which would be exactly what would work best for me... However the question is, if this is enough amplification for the ADC in an arduino.

If I can't get a satisfying answer I think I'll build both and see how they compare/work for me.

For the most basic circuit you must bias your microphone since it is electret with a 10k pull up resitor. If you do not want to build a complex circuit you could use a breakout board such as this one. To build your own see here. It is used as a VU meter which is basically the same idea. Also, make sure you observe polarity(pin with traces touching metal packaging is negative).

You can use Maxim MAX4466 op-amp which works very well with Arduino. There is a breakout available for the same for arduino at Adafruit here. The chip has a select-able gain from 25x-125x. This amplifies works very well to get a nice waveform for audible noise. There are a couple of libraries available for the waveform that you record and can translate it to frequencies. You can also use it to distort or change the voice. Here is a schematic of the circuit if you want to make one yourself. 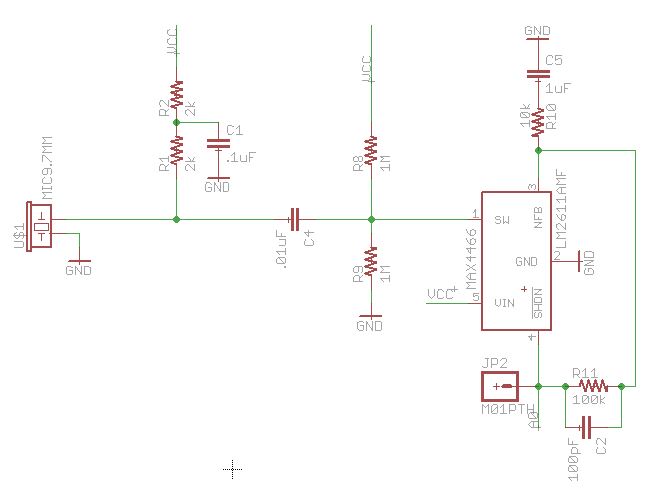 This circuit without C4 and everything after R4 (no rectifier, not a single diode used). R4 has to be switched for 100kOhms, since this gives a 100x amplification. I guess this is simple enough for most people. Thanks for the hints.

The following code can be used to detect claps/noises. It is restricted to a double-clap with silence in between. Parameters can be easily tuned. This works quite well for me, even when I play noise/TV/music to the speaker directly it triggers rarely, or not at all!

0
Arduino Board with Microphone
1
Microphone Data on Arduino to Wav File on RaspPi
0
Microphone input into Arduino uno R3
2
How to detect the pulse width from microphone as Input?