I want to be able to dim various high powered (20mA) LEDs in an array (8X12 LEDs). I do not need individual control, but would like to be able to dim each row (or two rows together) so that I can create gradients.

An important caveat is that I can't use pulse width modulation (PWM) as there should be no flashing whatsoever, even if it is invisible to humans.

How can I best achieve this? (I do not care about energy efficiency)

The fist thing I found which seemed to be the right solution in the beginning is using digital potentiometers as explained in this tutorial. However they only support low currents so I can't use one channel for 8 or 16 LEDs. Maybe I could use various digipots in parallel with one Arduino, each powering 1 LED per channel? But that sounds overcomplicated and a nightmare to wire up. Is there a more elegant solution?

The figure below illustrates a method of current control. It shows four LEDs in a 2x2 arrangement; one would adapt the number of LEDs in series or parallel in accord with how one's array is wired, what voltages are available, LED current requirements, transistor power limitations, etc. [Edit: See transistor-power example calculation at end.]

Each separately-controlled group of LEDs would need one such circuit. Each circuit needs one control voltage (eg, from a DAC or a digital potentiometer voltage divider circuit) and needs one transistor per series chain. 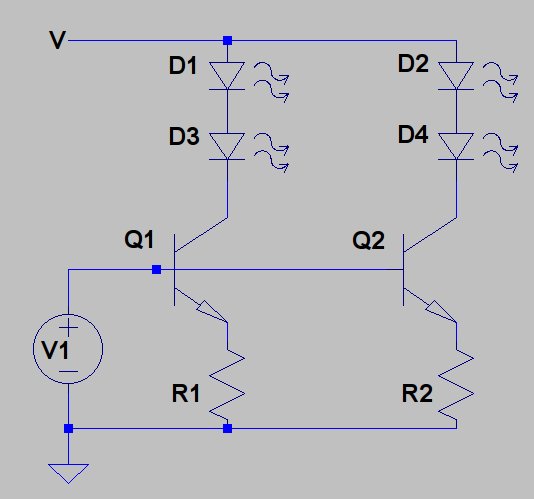 Under these conditions, V1 will drive current into the bases of Q1 and Q2, causing transistor-amplified current to flow through R1 and R2 and maintain the condition V1 = Vbe + VR1 = Vbe + VR2.

The amount of current required from the V1 voltage source depends on transistor hFE or β. Eg, if β is about 100 and ILED is 20 mA then each transistor will need about 20/100 mA or about 200 μA of base drive. This amount of current probably could be delivered by a voltage divider based on an AD5206 (the digital potentiometer chip that's used in the SPIDigitalPot tutorial mentioned in the question).

Only a small fraction of the current through a voltage divider can be drawn off without upsetting the division ratio. A unity gain buffer amplifier [as in the following figure] can be used to increase linearity of voltage-divider output by providing a high-impedance connection to the divider. 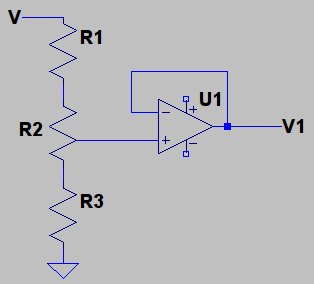 [Edit: When V1 is set to less than VBE, no current will flow through the LEDs. That is, to turn off the controlled LEDs, set V1 to VBE or less.]

It may be worthwhile to experiment with using a PWM-driven low pass RC filter to supply V1, possibly avoiding need for buffer amplifiers and digital potentiometers. See eg “Arduino’s AnalogWrite – Converting PWM to a Voltage” by Scott Daniels at provideyourown.com, and also see the filter-calculation page it refers to. You might need an oscilloscope to verify the design and its quality of results, and might need to use several RC filter stages in a row to adequately filter out ripple, but it can be done, at the cost of slower response to control changes.

Letting VCE, ICE, VBE, and IBE represent collector-to-emitter and base-to-emitter voltages and currents, transistor power dissipation is VCE·ICE+VBE·IBE. Because VBE·IBE is likely to be sub-milliwatt, we ignore it in following, taking P ≅ VCE·ICE.

In the LED-driving circuit, VCE = V – VLEDs – Vsense, where VLEDs is the series voltage across the chain of LEDs the transistor controls, and Vsense is the voltage across the sense resistor (ie, across R1 or R2 in the top figure).

In general, it is a good idea to keep Vsense small (under a volt) to allow a wider compliance range – ie, so that LED current is the same over a wider range of variation of supply voltage V. Thus, the approximation VCE ≅ V – VLEDs is reasonable.

For a third example, suppose eight LEDs are paralleled (rather than seriesed), that VLEDs = 2.0 V at 20 mA, that Vsense is about 0.4 V at desired operating point, and that V=5 V. The transistor will need to drop 5-2-0.4 V = 2.6 V at 160 mA, which is 416 mW, probably large enough to require a heatsink. [Note: if LEDs are placed in parallel and driven by a single transistor, some of them probably will be dimmer than others; “current hogging” may occur in some of the LEDs, making them brighter than the others. However, many cheap flashlights connect LEDs in parallel without individual current control.]

Not the answer you're looking for? Browse other questions tagged led potentiometer or ask your own question.

4
Fading the brightness of LEDs using MAX7219 and PWM
1
Using an Arduino Nano, how many LEDs can I safely power?
0
How to build a high-frequency (>20kHz) driver for LEDs?
2
constant current or constant voltage power supply to use with RGB shield with high power LEDs
1
How to control Neopixel LEDs in parallel?
0
FastLED - How to Control specific LEDs
0
PWM Control, How to stop LED from Flickering?
1
How can I PWM 4 LEDs from 0 to full brightness using a two axiz resistive joystick?
0
LEDs always dim with arduino nano