I'm designing a custom dual-uC board, where I want there to be two Arduinos both running different programs - kind of dual core arduino. In order to load new programs onto the uCs, yes, I could have two USB ports each connected to one of the uCs (say a ATmega32u4). But I'm trying to work out strategies with just one USB port (and no usb-hub).

Also, I don't need the USB functionality for general use, only for program updates.

EDIT: this is fine, however I ideally want to use zero additional end-user buttons - I want the end-user to do as little as possible.

The arduino UNO has two devices, ATmega16U2 and a ATmega328. During normal operation the 16U operates as a usb-to-serial. However, I'm aware that there are custom firmwares that allow different functionality (such as USB-Joystick etc) - it is possible to switch firmawares between a custom-firmware and default firmware, to allow the ATmega328 to be programmed normally but also to run the custom program. But it seems that Arduino.h doesn't support the ATmega16U2, so I would have to program this device using the AVR or another framework.

Alternatively, the ATmega32U4 is supported by Arduino.h but there doesn't seem to be Arduino usb-serial 'firmware' for the 32U (only the 8U & 16U)

Can I use a ATmega32u4 with Arduino-ISP programming an ATmega328p?

EDIT: the firmware update should be physically as hands off as possible, as to be used by end-user, and preference for solutions that require zero additional buttons/etc

I tried the Arduino as ISP method (option 3), and it works

Provided that you are okay with producing a customized PC side tool (which you would probably want anyway for user convenience) automated target selection should be far superior to manual.

You should be able to use one ATmega16u2 with a minimally customized firmware as a front end to program two distinct ATmega328p's. This could be as simple as selecting the target based on the baud rate, having it hold the de-selected one in reset the whole time, and using some resistors on the shared TX lines for safety. Last I checked the stock firmware used a soft serial at some rates, and that can be put on different pins, so it could be another way to de-conflict and select targets.

Your idea of using a 32u4 both as a functional part and as a buddy-programmer for another part is perfectly valid too - you can do that programming to a serial bootloader (it should be a simple matter to port the 16u2 firmware, or find another example), or via the ISP pins.

Now that I think about it, there's been a version of this question here before, as I remember writing about an idea for using two ATmega328p's permanently wired to a stock USB-serial, but with their bootloaders customized to use unique baud rates, and a little logic added so that on reset each would leave its serial TX pin tristated if it didn't detect bootloader traffic at its individually unique baudrate, thus allowing the other to be programmed without interference.

Option 1 using three header pins and a jumper wouldn't take up much board space, is simple to implement, and easy to use. Even easier if the jumper has a handle. 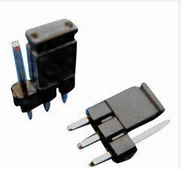 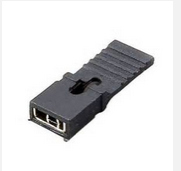 Not the answer you're looking for? Browse other questions tagged uploading or ask your own question.